Billy Blue Records has signed the award-winning bluegrass group Joe Mullins & The Radio Ramblers. The announcement was made live onstage at the Southern Ohio Indoor Music Festival in Wilmington and was also live streamed on social media.

Jerry Salley, Creative and A&R Director of Billy Blue Records commented, “I've known Joe for a lot of years, and the opportunity to sign and work with him and his band is an absolute honor."

Audie Blaylock and Redline has teamed up with Hemisphere Coffee Roasters for a good partnership.

It all started after Reed Jones of Redline, who calls himself a “coffee snob,” discovered a kindred spirit in his favorite barista with Paul Kurtz, owner of Hemisphere Coffee Roasters. That prompted Audie’s band to create a jingle for the coffee. It's now posted on Youtube.

Appalachian Road Show will release an album on October 26. This marks the first act to be signed by Jerry Salley and Ed Leonard to the new label Billy Blue Records.

GoGo ShowPrep sat down with Barry Abernathy, Darrell Webb, and Jim VanCleve and got the stories behind each song they recorded. All edited  into sound bites to use on your radio shows, podcasts, or for quotes for your written reviews. Check out audio on the new single "Dance, Dance, Dance" and then CLICK HERE to check out ALL the audio!

Here's a quick look at who you'll hear on the Cut X Cut Interview:

Barry Abernathy:  Multiple IBMA recognitions, 1997's SPGMA Banjo Player of the Year. Known for his work with IIIrd Tyme Out, Doyle Lawson & Quicksilver, and a founding member of Mountain Heart.

Darrell Webb of The Darrell Webb Band : Multiple IBMA Awards nominations to his credit, played with bands such as Wildfire, Rhonda Vincent and The Rage, Michael Cleveland and Flamekeeper. 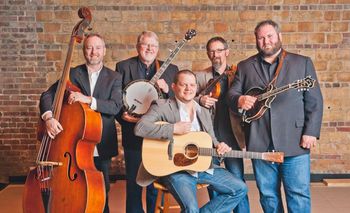 A few of the other winners include:

Song - “If I’d Have Wrote That Song” (written by Larry Cordle, Larry Shell and James Silvers) Becky Buller Band had a great showing at the IBMA Awards on Thursday night (9-27) with 3 wins.

Ned Luberecki won Banjo Player of the Year and Becky was awarded Gospel Recorded Performance for "Speakin' to That Mountain," a song that she co-wrote as well as sang. For her 3rd trophy, Becky, along with Missy Raines, Alison Brown, Sierra Hull, and Molly Tuttle won the Recorded Event of the Year with their collective work on "Swept Away. "

We talked to Becky before the awards and she told us how much fun all the women have - sharing a dressing room:  AUDIO :28 Out Cue: "the guys I get to play with in my band."